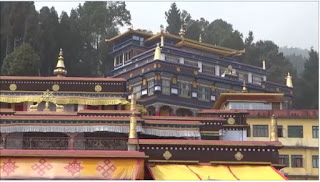 We did visit many monasteries in Sikkim.  I am including a write-up on the one which impressed me most, a monastery easily accesible from Gangtok.

The Rumtek Monastery is one of the largest and most significant monasteries in Sikkim.  it is perched on top of a hill 23 km from Gangtok. It is also called as the Dharmachakra Centre.

The Monastery houses a beautiful shrine temple and a monastery for the monks which were established with the aim of spreading the Buddhist teachings around the world. Verdant green mountains surround the monastery and thus serves as a visual treat besides being a focal point for spiritual solace. If you climb on top to the Rumtek Monastery, you can have a breathtaking view of the whole Gangtok town situated right opposite the hill. Besides this, the architecture of the striking monastery is one of the finest in the world.

The monastery belongs to the Kargyu sect of Buddhists who originated in Tibet in the 12th century. The Karma Kagyu school belongs to the Vajrayana branch of Mahayana Buddhism.

The gompa, an epitome of Tibetan architecture, was designed by the 16th Karmapa, Rangjung Rigpe Dorje himself based on his memories of the Tsurphu Monastery of Tibet, the original headquarter of the Black Hat order. Tsurphu was completely destroyed by Chinese authorities in 1966.

Built in the 1960s, the monastery is the main seat of the Karma Kagyu, a sect within the Nyingma school of Buddhism that originated around the 12th century in Tibet.

Vajrayana Buddhism has many rituals.

Between February to March, which is the end of lunar year’s 12th month, there is an organization of 10day rituals for Mahakala protector. This is followed by the sacred tradition dance of the Mahakala. Monks dress up in the colorful attires and wear to dance with the traditional instruments. You will be surprised to find that how they go into some kind of trance with the beats. Since this is one of the ritual dances, they only have well-trained dancers.  The empowerment of the prayer music in the dance comes from compassion, concentration and mindfulness.  Buddhism asks all of us to turn the wheel of Dharma for all sentient beings(human and non human alike)

Enjoy this video shot in the monastery

Theravada Buddhism and Mahayana Buddhism and the two main branches of Buddhism. I requested Mohit, research assistant in Buddhism studies at IGNCA, New Delhi to explain in brief the progression of Buddhism as it spread out from India.  I have included a talk by him to put the visuals in perspective.

In view of the  COVID-19 linked locked down,  Mohit recorded the talk and sent the audio to be added.

Half a dozen videos on Buddhist monasteries and pagodas uploaded in this forum and on IWC’s Youtube channel document significant developments in the history of Sikkim. It feeds curiosity and will egg all to dive deeper