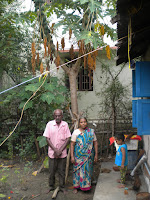 The monsoon rain started during November, 2014 – the initial rains were good. When the rain poured non-stop for a fortnight destroyed vegetable cultivation. So it happened to the kitchen garden of my neighbor too. The entire kitchen garden with Amaranthus, Okra, cluster beans, beans and gourds could not withstand the water stagnation. The papaya tree laden with fifty big papayas and fifty small papayas could no more stand straight. The tree fall with the fruit bearing tip broken. They were about to severe the entire tree, I happen to watch it over from my windows and stopped it. I immediately rushed to the plant and asked to find supportive poles and make the papaya plant straight as much as possible. 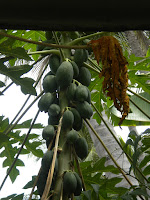 February 2015 gave me a surprise with three tine buds from the node little lower than the broken edge of the papaya tree. I was so excited and felt very much encouraged, as the tree spoke me to EXCEL THE PAIN. It became a non-voluntary action to see the plant every day in the morning. In the month of April, buds turned into branches but there were heavy infestations of Papaya Mealybug (Paracoccus marginatus). I asked them to remove the infected leaves often. They turned frustrated asking me is the bug coming to your house. Then I explained about the mealybug and could be controlled by manual removal of the leaves, luckily there were no infestation of the bug in any of the other plants nearby. 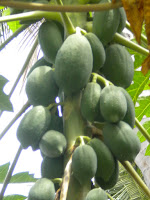 Now during July, I was amazed to see the papaya tree with three branches, all the three loaded with papayas big and small. What made me wonder is, “the plant which could not bear the load of a single plant is now capable of its triple bearing – from many nodes there are two, three or five papayas”. What a lesson the MIRACLE papaya tree taught me - ENDURE THE PAIN, WORK HARD and BE SINCERE, withstand all the odd situations and one day surprising results turn all the agony into glee.