"There is talk of a lion loose in Langata, so let us stick together in a group and not stray,” warns Fleur at the start of a birding trail in Ngong Racecourse that will eventually lead into Ngong Forest. Once in a while,Nairobi wakes up to an event of a lion or a hippopotamus dropping by the township causing panic (in the neighbourhood) and amusement (to people in other areas). As an aside, listen to this: the civic authorities in their wisdom put up cages at various places in the neighbourhood to catch the cat, but reported that while no cat was found entrapped, they did bait a few hyenas!) Given that the Nairobi National Park is close to the City Centre, as the pied crow flies, it should be newsthat these episodes do not occur often. But nothing can deter the ragtag bunch of birdwatchers of the Wednesday Birder's Club or keep them from their weekly date with birds.
What draws birdwatchers to field trips, come rain or riots, week after week over months and years, to more or less the same places? Doesn't it get monotonous viewing the same garden variety of birds of bulbuls and weavers, or that after a few outings even the uncommon birds become commonplace? Mountaineer George Mallory's classic reply on climbing mountains applies to birdwatching, too. He is known to have said: "Why climb a mountain... because it is there." Birdwatchers watch birds because they are there - all around - in our backyard, in neglected niches of our neighbourhood and in urban forests.  People go on African safaris or Indian jungles to see large mammals - the Big Five, the cats, the elephants, the hippopotamuses - but few have the patience to sweep in the smaller avifaunal species that are transitory, hyperactive and that do not wait out our cursory observation skills. That is precisely why birdwatching and its related nature-watch component of observing butterflies and insects becomes a more subtle and sublime venture. It calls for marshalling of almost all sensory faculties to the point of utter concentration bordering on meditation.
Imagine an amorphous painting with hidden images – an illusionary art – which a child has to figure out? The child spots a dog here, a car there, and suddenly million things stare at him and the painting comes alive with all its differential aspects standing out vividly. Birdwatching is something similar. The monochromatic leaves of trees of the woods assume varied shapes and characteristics and become separate species; birds blended in trees and shrubs break free becoming visible entities; and butterflies cleave from self-same-coloured flowers to fill up bare spaces. The singular green of the trees, brown of the soil and blue ofthe sky disperse into multicolour mobile mites that, at first, seem obscure.
And that brings me to the magician birder, Kevin. In my previous blog, I focused on the leading lady of the Wednesday club, Fleur, but Kevin is another of those ardent bird lovers who can unravel images and forms from illusory nature. Without binoculars Kevin spots a fish eagle almost two kilometers across the wetland that we have trouble focussing through binoculars; the white shirt front is unmistakable and though the face is obscure, the upright stance is a dead giveaway.   I have never understood how truly passionate birders are also good imitators of bird calls. Kevin takes us to see the Narina trogon in its territory inside the Ngong forest, but we are a big group treading noisily over dry leaves and twigs, a loud threat for the shy bird. Kevin imitates its call and though it does not make an appearance it responds!
He herds us next to see the nest of an African Crowned eagle. I had seen the female crowned eagle sitting by its unwieldy and twiggy nest that was empty, two years back, and after that was going there only today. Meanwhile, the birders had been checking on it on their intermittent sorties. Imagine the exhilaration of seeing a fledgling sitting like aking comfortably on its home perch; the mother was obviously away hunting for a baboon or a small antelope for the young one.  Kevin fills the gaps for me in the life of this particular eagle. It is a privilege to get a window into the isolated world of a giant aviator predator that resides far from the madding crowd of humans and to witness individual stories unfold.
A fluty call greets us persistently as we walk back by the edge of the forest; this is the yellow-breasted apalis marking its territory. The apalis descends down from trees to a low perch when it makes that call so that it carries far. You realize then that birding is not about simply identifying birds by their appearance- that is but a first fledgling step. Birdwatching is about observing bird behaviour to understand their nature, their language -  their calls and songs, and their needs. It is befriending them to get to know them intimately, to empathize with them and love them, but from a distance. After all, all creatures, big and small, are but a part of the whole, an indispensable ingredient of the world wide web.
Chick of  an African Crowned Eagle in its nest in Ngong Forest 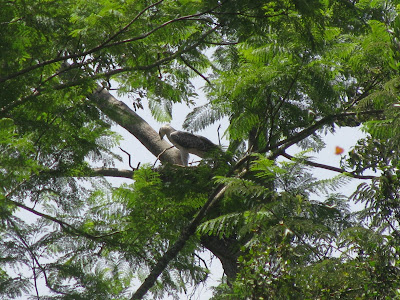 Also read:  http://padmaja-earthletters.blogspot.com/2012/02/wednesday-birders-club.html
My (Padmaja Parulkar) blog
http://padmaja-earthletters.blogspot.in/
on travel, ecology and environment seeks to marry my two passions of nature and creative writing. Through these earth-letters I share my personal experiences relating to Earth and its natural beauty, among other things.
Share this post: